How to identify your Alpine

“What Series Alpine do I have?” This is a common question so we will attempt to answer it as easily and simply as possible. Most of the required information can be found on your Alpines data tag located under the bonnet. There are basically two different locations for this tag depending on the Series of Alpine in question. Visual identification is covered by clicking on the “Series Alpine ’59 – ’68” link.

Series I’s and II’s all have the data tag located on the left hand side of the scuttle, under the bonnet of your Alpine. This can be seen circled in yellow on the picture shown to the left. All Series I’s and II’s have this large 4.75″ x 5.75″ aluminum plate that is silk screened with important information such as recommended lubricants, ignition timing and tire pressure. The chassis or serial number can be found die stamped on the top left of the tag. This number will begin with a B90 to indicate a Series I or a B91 to indicate a Series II. A colour code can be found stamped into the top right hand corner, with the exception of the early Series I’s. Early Series I’s have a body number instead of a paint code. This changed sometime during production to the first evidence of a colour code, which appeared in the same location as CC 39 or what ever the colour of the vehicle was. In this case I used 39 for Carnival Red. 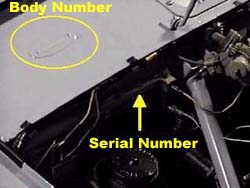 Series I and II Alpines are also the ONLY Alpines to have the Serial number stamped into the actual chassis of the car. This practice was discontinued sometime shortly after production was changed to the Ryton-Upon-Dunsmore Assembly plant in February of 1962. No other time during Alpine production did this ever occur. It can be located on the right hand side of the scuttle stamped into the raised portion of the bulkhead, as identified in the picture to the left shown with a yellow arrow. This number can sometimes be difficult to locate if the car has received several coats of paint. I have no knowledge as to why this practice was stopped. One other item of importance is the Body Number. This number can also be located on the right hand side of the scuttle on an oval shaped tag which has been pop riveted and painted along with the body. These numbers were assigned to the bodies BEFORE they were assembled in order to identify them before they received their proper chassis or serial numbers. As you will notice on the registry, these numbers slightly differ from the actual number found on the data tag, but are somewhat close. This is due to the bodies being sent back through an assembly rework line prior to getting their final VIN numbers. The Body Numbers were replaced with the SAL tag sometime during late Series II production around the same time serial numbers stopped being stamped into the chassis. 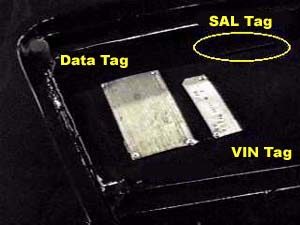 Series 3, IV and V Alpines differ quite a lot from the early cars. While there are slight differences in data tags between the three, they all basically share the same basic format and location. For this reason I am grouping them all together. I will explain some of the small details found between the different series. The picture shown to the left is from an Embassy black Series 3. Note the new design on the data tag, as well as it’s new location. This tag can be found on the right hand side of the scuttle, along with the SAL number and a separate tag fro the recommended fluids and timing specs. The recommended fluids tag was omitted from the Series V. The SAL number replaces the Body Number found on the Series I and most Series II’s. I believe it served the same purpose as the body number and it identifies the Sunbeam Assembly Line for production. The data tag still contains the Chassis or Serial number, as well as the paint code. These tags were steel on Series 3 Alpines and later were manufactured from aluminum on Series IV’s and V’s. To identify an Alpine by Serial number follow this basic rule: Series 3 begins with B92, Series IV with B94, and Series V begins with B395. No Series 3 , IV or V Alpines ever had a Chassis or Serial number stamped directly on the body or frame… anywhere on the car. This practice was stopped with the Series II for unknown reasons as explained above.

Engine numbers – Engine numbers can be located on the distributor side of the engine, just in front of the oil filter. You will find a milled surface with the entire number including suffix die stamped directly into the block. This number should match the number on the data tag for your car to still have the correct block. Many Alpines today have engines from many other Rootes vehicles. If your engine has a cast iron head… then it may not be an Alpine block. Cast Iron heads require a different camshaft as well.
Letter Codes – “What do the letter codes on my data tag mean?” I have listed the codes with definitions below. Remember, not all of these options were available on Alpines. These codes cover the entire Rootes line of vehicles.

Example: B9109510 OD LRX SB
This is Series II Alpine number 9510. It came equipped from the factory with overdrive transmission and sealed beam headlamps. It is a left hand drive export vehicle, a roadster, built to non-standard specifications. Standard specifications would be that of a home market vehicle. All Alpines sent to North America by Rootes were stamped LRX. Anything else would be a special import vehicle handled by a private individual. SOME vehicles have been found with error stampings such as an S in place of an R in the middle suffix. This is in error only. Alpines can’t be saloons. That just makes common sense.