Soon after the successful introduction of the Sunbeam Alpine, Rootes designers were faced with the task of creating a closed top version of their increasingly popular convertible. In an effort to shed the Alpine of its growing image as a ladies car, Rootes officials decided to target a different market by offering a Shooting Brake, or Estate Wagon version to the most proper of English gentlemen. During this time in British motoring history, several distinguished sports car manufacturers, such as Aston Martin, built Shooting Brakes in vary limited numbers, to cater to wealthy English land owners for carrying such items as hunting gear or other equipment needed on a gentleman’s estate. 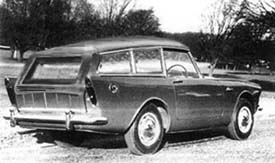 Few people realize that Rootes actually built a very small handful of these luxurious sports wagons. Actually, its rumored that only three examples were produced before Rootes decided to turn in another direction and enter the sports coupe market with a joint effort that would produce the famous Harrington Alpine. Evidently, the Shooting Brake was very expensive to produce. The body consisted of a die pressed sheet metal top that was welded directly to an Alpine body. Once the necessary bodywork was completed, the Shooting Brake was loaded down with leather interior and real walnut trim. Dripping with luxury, this estate wagon priced out at over twice that of a stock Alpine. So, its easy to see why Rootes dropped the project for the Harrington. The Harrington firm, one of the leaders in fiberglass at that time, was able to affordably produce a much less expensive product, that had a much stronger appeal to the public.

It wasn’t until Scott Christie showed me these concept sketches that I became aware of the Shooting Brake. Since then, Scott has found other evidence to prove the Brakes existence, but as of today, none have surfaced. Other than some rare factory photos, the Shooting Brake seems to have vanished without a trace, as if it never existed. The closest I’ve come to actually finding a Shooting Brake was the time a guy in England claimed to have found one in a wrecking yard. However, it simply turned out to be an Alpine with a Volkswagen Type 3 roof resting on top of it. Needless to say, I spent many sleepless nights over that one! 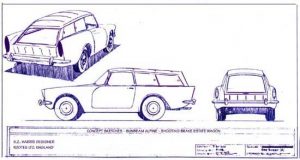 The ad seen here ran in the April 1960 issue of “Modern Motoring”. Note the price of £3024.00! Nearly twice the price of a new Alpine at that time. I would sure love to ad one of these beauties to my collection, so if anyone can help me locate one, please contact me. 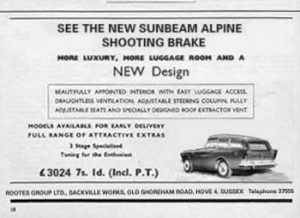