It has been rumored that Rootes was fighting to keep the Sunbeam Alpine and Tiger alive during the final days after the Chrysler take over. We all know the Tiger suffered it’s fate due to the use of a Ford power plant in a now Chrysler owned product. The Alpine, however, suffered a different fate. During the later part of the Series V run, Rootes began experimenting with it’s new ideas for the Alpine. In order to stay with the market and keep the Alpine competitive, Rootes decided to once again step up the Alpines performance. This would involve reworking the Alpines 1725 cc power plant to bring it to a 1948 cc displacement, thus bringing the Alpine into the 2 liter range and once again topping all other sports cars in it’s class. One 2 liter Alpine prototype was ordered to be produced and sent to the United States for testing in September of 1967. This would be Rootes final opportunity to save the Alpine from Chryslers vision of the future. Chrysler, eager to move away from the past, would eventually pull the plug on Rootes and their hopes of saving the beloved Alpine. The Series VI Alpine would never see production and the Alpine would soon only become a name attached to what we now know as the ’69 &’70 Alpine GT. The same car as the Plymouth Cricket. But, what ever became of the Series VI prototype? Was it a success, or just a bad attempt by Rootes to save a dying breed? 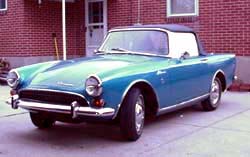 It was last fall when I got a phone call from my friend and business partner Jan Servaites. “I found another Alpine” he said, and I just shook my head and thought, “Here we go again!”. You see, Jan and I are both inflicted with the Alpine disease. Orphan Alpines always seem to find us and we have not yet learned how to say “NO”. This one, as Jan described, was a complete and original late model car. Jan said the guy on the phone kept insisting it was a Series VI Alpine. Of course we thought he was nuts. It’s not uncommon for someone to call and try to sell us a car and not have a clue as to what they are talking about. Usually, you get the typical stories about how it’s a rust free car, never been wrecked, and runs great. But, when you get there, it’s a piece of junk, full of bondo, and won’t start. This is common. So, from experience, Jan and I don’t get too excited about anything until we’ve actually seen it. Of all the cars we go to see, I’d say 1 out of 10 ends up being correctly portrayed to us by the owner. It’s just what you come to expect in this hobby. 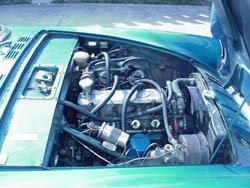 Rule #1: It’s always worth your time to go look. You never know what you might find, and in this case it was gold! We arrived at the gentleman’s house to see the Alpine and it looked nice. He pulled it out of the garage as we arrived and it sounded good. It was painted a rare Alpine color, Code 127 Turquoise Blue Metallic and had steel wheels with old bias ply tires. We greeted the man and began inspecting the car. Immediately I had noticed a few odd things about this car. Firstly, it had the Tiger MKII trim! I asked him how it ended up getting the chrome and he said it was on the car when he got it. He told me that he bought it from Key Motors back in 1970. Key, was a used car lot here in Dayton that is no longer in business. The car had the Alpine script that was mounted at an angle just like that of a MK II Tiger script. Now, I must admit. I was excited. The Second thing that popped out at me was the badge that read Series VI. “What?” I thought. This can’t be… unless, …I went to pop the bonnet and have a look. The Data tag revealed the number B395999999 PP LRX. This was the missing Series VI prototype! 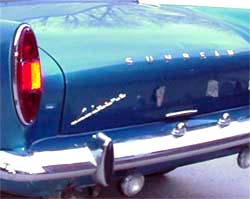 I bit my tongue until Jan and I took the car for a test drive. The man that owned the car lived in a small town just out side of Dayton. There would be plenty of country roads to drive while we talked about the chances of finding such a rare Alpine… literally in our back yard. As we drive, you could feel the power of the 1948 cc engine pull. Off the line, the torque can be felt and as you wind out through the gears the acceleration is by far much greater than the 1725 cc. This was a GREAT car and to imagine that THIS car happened to have been garage kept by the same owner for 30 years! It was too good to be true. We arrived back at the owners house and began to talk. I was having a hard time hiding my excitement, but Jan remained rock solid and expressionless. The owner had decided to sell because he wanted to take his wife and move to Florida. He was elderly and no longer wanted to burden of caring for the classic Alpine in his garage. Since he was no longer going to have a place for it at their new home, he wanted it to go to someone who would care for it as well as he had for so many years. Jan and I told him of our involvement with the Alpine and about our own personal collections. He approved, a deal was struck and Jan drove the car home. 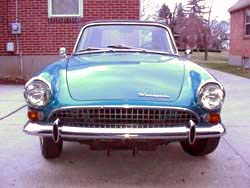 What a fine example of an Alpine this car is. It will require some minor cosmetic cleaning and paint detailing, but for the most part it’s exactly the way it was in ’67. It still has the original rubber floor mats, tool kit, and trim. Jan plans to restore the car by gently fixing and repairing the little dings and imperfections. The body is still very solid, but some of the paint has been resprayed. A good portion of the car is still original paint and Jan has been able to use samples from the car to get the exact mix for this unusual and rare late Alpine color. Only a FOOL would have passed up on this car!